It’s been such an honor to have Guru Robert as a teacher, facilitating my silat journey.  His patience, humility and deep understanding have been as engaging as his skill and I figured it’d be a pleasure to get his take on just 5 Questions about his ideas on teaching his student journey.

Robert Hilliard of Kuno Silat talks back to 5 Questions from Njoli Brown at NoPaper. 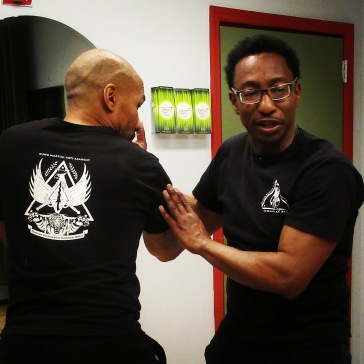 tually a black belt, had a friend who was opening a Kung-Fu school in a local community center. My brother thought that would be good training for me, so he enrolled me and another of my siblings at the school. I trained there until I finished high school. After college, I ran into a friend that was studying Wing Chun. I loved the efficiency of that system and trained for over ten years. After that, I was introduced to silat by a neighborhood friend. I was instantly drawn to it’s effectiveness and completeness.

My experiences have been varied. I try hard not to look at them through the lens of good or bad, but as learning opportunities. I’ve had some teachers that were, what some would consider heavy handed, while others were nurturing and accommodated. Early on, some of my teachers pushed so hard that I got injured during training. When this happened, they would frankly state that it was not the training methods that caused the injuring, but my lack of conditioning, etc. Those were unpleasant experiences, but they taught me to listen to my body. It also taught me that good teachers don’t push their students beyond their physical limitations. I should note that those experiences happened while I was studying others systems. The vast majority of my experience with silat have been incredibly positive. 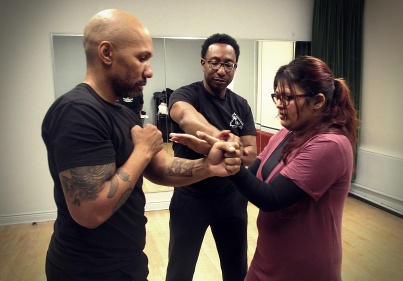 As an instructor, I try to create a warm and welcoming environment where people can come to class, work hard, and enjoying their progress. I teach my students that success in martial arts, or life for that matter, is not a straight line. It’s okay to struggle and fail as long as you are “failing forward.” As far as my student’s aspirations go, I want everyone to be ambassadors of the art and have confidence in their ability to execute what they’ve learned with confidence in class or in the street, if need be.

I manage my personal practice by making sure that I carve out time during the day to train all aspects of the art. I learned that it’s easier for me to train early in the morning (around 5:00 am). Of course, you can’t train everything in the system in one day, so I focus on certain aspects throughout the week. The jurus (forms), I train everyday. I also try to make sure that my general fitness is good. I’ve also learned to listen to my body, so I don’t train when I’m sick or injured. Instead, I give my body time to heal. 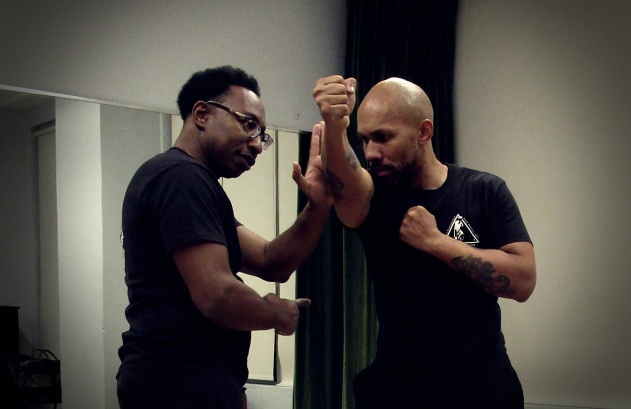 To make things relevant in my daily life, I use the two basic principles of silat: adat and hormat. Adat is how you conduct yourself. Hormat is respect for all around you. As a instructor, I believe that I should be a mirror for my students outside of class as well as inside.

Robert Hilliard is a student of Senior Guru Tim Anderson and a long time promoter of this Indo-Dutch system of silat as Head Instructor of Kuno NYC.  He additionally has an extensive background in Wing Chun.  Robert brings his classes alive by consistently imbuing them with a community feel while committing his students to a highly technical and detail oriented practice.

Semangat Baru is the name of our specific style of Pukulan Pentjak Silat. It translates to “New Spirit” and reflects our new way of viewing and teaching the ancient art of Silat. We operate free from any kind of “secrets” or “martial politics” that can become attached to coveted knowledge. The style itself focuses overwhelming an opponent with strikes, while finding leverage points to take their balance and ultimately subdue them.

Silat is a collective word used to describe martial arts originating from South East Asia, such as Malaysia and in our case Indonesia. Pukulan is a word that means striking. In this case denoting a silat system that places a heavy emphasis on hitting. Pentjak is generally considered to refer to the movements and performance of forms where “Silat” is an expression of those motions for use in combat. So “Pukulan Pentjak Silat” could be seen to mean something like “Striking form based Indonesian Martial Art”.

*Special “thank you” to Jelena Antanasijevic for the photos.