So, I’ve spent the last couple of weeks trying to wrap my head around the entirety of my recent experience in Cuba.  Working with other artist-educators, exchanging ideas about this endless work of empowering youths in marginalized communities, all of it was tremendously inspiring and thought provoking.  I’ve been wanting to share that here but instead, in trying to encompass everything, I find myself spinning and inadequately capturing the profundity of things every time I try to put something on paper. I’ve decided I need to break this down for myself.  Over the next few weeks I figure I’ll take moments, pieces of that short but impactful time and engage in some explorations. 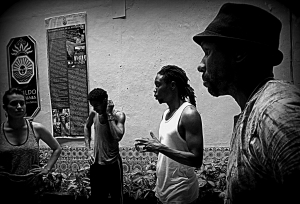 That being said I wanted to start by discussing the workshop I facilitated in Havana using capoeira as the medium.  My objectives were to explore the ideas and constructs that determine our process for valuating beauty. In addition I wanted to use this exercise as a catalyst for conversations on the concept of “embodying the spirit” and using the body as an efficient language tool.

We kicked it off by doing a brainstorm on popular concepts of beauty.  In part this was an opportunity for us to reflect on the ways in which social constructs sometimes diverge from our unqualified humanity.  When we moved into “ginga” I offered the structures as suggestions instead of rules. It was an interesting practice for me, to look at this form of engagement with laser focus on facilitating a journey of discovery instead of instructing a lesson.  A humbling thing to let go of my usual objectives and to hone in, much more deeply, on the method and process of sharing ideas.  We took the opportunity to explore the emotions tied to the tension and relaxation of muscles, the exploitation of the joints and the fear that is tied directly to the concept of equilibrium. 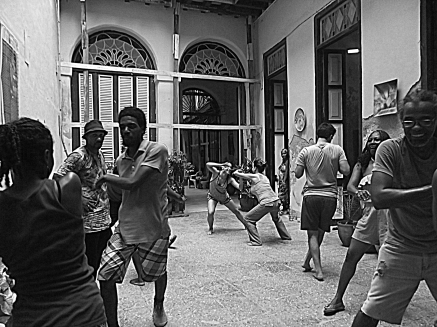 Each individual then chose an emotion that they had recently engaged with, something to which they’d had a strong response and maintained vivid memories of the physical experience.  After a moment of meditating on this emotion they partnered off and used  ginga as a vessel through which they could embody this emotion and see how it might inform their interactions.  Our next step was to recall our conceptions of central figures in our lives, matriarchs, patriarchs, elders, youths and through each of these lenses we interacted with our emotion experiment in greater depth.

So, through this we were able to tap into an experience of beauty as a concept that exists in greater part due to its capacity to stimulate emotional resonance as opposed to a design which we accept as beautiful because particular language has been associated with it.

As a next step we 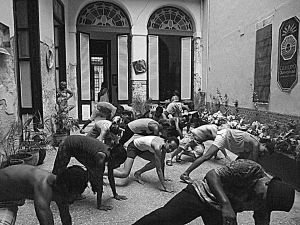 decided to use the language of the body to investigate the experiences of our compeers.  In capoeira we often talk about the body conversation as a game of questions and answers.  As often as not though, a player may ask questions without giving truly intentional scrutiny to the merit of his/her camarada’s responses.

It’s easy at times to get caught up in your own movement, in the power of inquisition, in the sound of your own voice.  But capoeira, as life entire, has the necessity of maintaining a balance between pressure and growth. We looked at our kicks and escapes as equal opportunities to observe ourselves as well as the our embodied identities of our counterparts.  We then processed the effects of the experience on our ideas about interpersonal communication.

How would we take this practice and apply it in our visual arts programming, our music, theater, writing? Did we gain some new 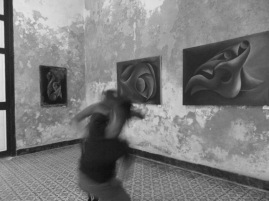 connection to the somatic process underlying emotion?  How could this be relevant to the work we do with youths? What will it mean to create something “beautiful” in the future?